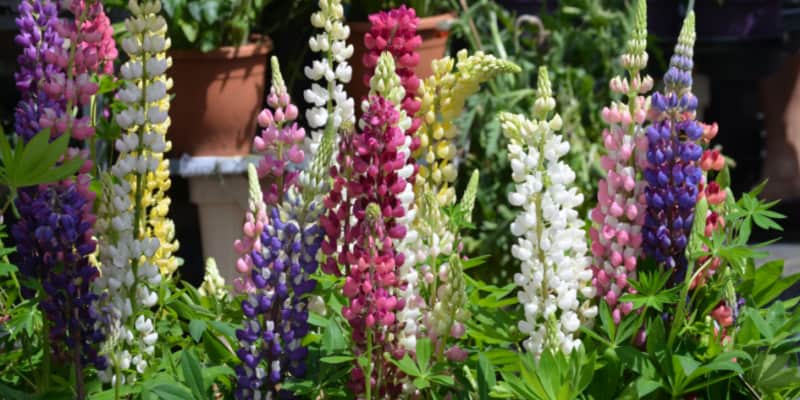 I’m a big fan of lupins as they are super easy to grow, the flower spikes look amazing, and they generally don’t require much care once established. As long as they’re in their preferred environment (sunny position in well-drained soil) they require little care. A little deadheading, watering if grown in pots and maybe feeding with a little potassium-rich fertiliser such as Vitax Q4 and they will do well.

Here’s my guide on what you need to provide to grow lupins successfully.

Types of lupins and don’t forget the dwarf varieties

First of all, be clear as to the type of lupins you’re growing. Border lupins are the most popular and common and usually grow in borders, I personally grow these, and these are by far the most common. They are usually perennials that go dormant over winter and reappear in the next spring. You can pick these up as garden-ready plants in spring, and they will usually flower in the first season.

There are few annuals which die off at the end of the growing season, so if looking for perennial lupins is best just to go straight to the perennial section of your local garden centre or look online. Flower colours range from soft pastels through to vibrant hues of pink, sapphire, purples and white.

It’s also were knowing there are many varieties of lupins, and some grow as tall as 3-4ft such as Russell hybrids which most garden centres stock, but you can also get dwarf lupins such as the gallery series of lupins which only reach around 45cm tall. These are great for the front of borders, rockeries, as well as in containers and pots.

Tree lupins are not so often seen. These are evergreen shrubs with (usually) yellow lupin-type flowers.

Make sure you have free draining soil

Lupins thrive in most soil, even what you might consider poor soils. However, they do need the soil to be moist with plenty of drainage. While they do grow in a neutral pH soil, I find they seem to grow a little better in slightly acidic. However, they can also grow in very acidic soil conditions too. Just don’t put them in alkaline soil as I’ve not done well with them when doing this.

To increase the acidity of your soil, dig in ericaceous (acidic) compost.

The best structure of the soil is loose sandy particles. Lupins have long tap roots (they’re a legume) and a more dense soil will inhibit the size and structure of the root. If your soil is dense, make sure to loosen it before planting lupins and digging in plenty of organic matter and some gravel.

If you have very poor soil, such as soil that does drain well or you would like to grow lupins but don’t have much room, then you can also consider growing them in pots. All types of lupins will grow well in pots. Ideally, you want to use deep pots as lupins have deep tap roots, but any reasonable sized pots will do. If you want to keep them in pots temporary, then a multi purpose compost will be fine.

If you plan on keeping them in pots permanently, then go with a soil based compost such as John Innes potting compost and add plenty of perlite or grit to improve drainage as this helps them get through winter.

They will also need watering more often in pots, as do all plants grown in pots.

Grow lupins where there’s full sun with at least six hours of direct sunlight. If you place them in the partial shade they won’t flower as much or as well. And if they’re in deep shade, they won’t flower at all; trust me, I’ve tried. However, they can handle dappled shade as long as it’s not too dark.

On the other hand, too much strong sunlight and a hot period can also stop the lupins from flowering. Make sure the soil around the plants stays cool by applying a layer of mulch, as this helps retain moisture. But not too near the stem of the plant as this creates an environment for pests and diseases to flourish. I generally only really mulch around my lupins in the fall/autumn as it also provides some winter protection for the roots.

Plant in a sheltered but sunny position

Usually, I plant my lupins towards the back of borders, shelter isn’t usually an issue. As these are tall plants, you may need to stake them if they start to bend over, especially if the area is a little exposed, to keep the flowers upright. And tall plants are more susceptible to strong winds which can bend and break them. I like to always plant my lupins in a sheltered but sunny position.

Lupins definitely don’t like soggy or water-logged soil. That kind of environment encourages root rot which can eventually kill the plant. (See Lupin pests and diseases for more details.)

Water young plants regularly in their first growing season as you would with all perennials. Then water at least weekly if they haven’t been any rain during the growing season. Watch out for long, hot, dry spells and increase your watering schedule.

Once lupins are established and are growing strongly, you may not even need to water them at all. I find that they are drought tolerant, and the long tap roots can search far down into the soil for moisture. Lock in the soil moisture by layering mulch on top of the ground around the plants, as previously mentioned.

Lupins generally don’t require fertiliser. Be aware that adding too much nitrogen to the soil can result in wonderful foliage but only a few blooms. Lupins fix the nitrogen in the soil themselves, so rarely need any more added.

Lupins like just regular soil without added nutrients which are why they grow well in what I would consider being poor soil as long as the soil drains freely. Your main concern is to provide slightly acidic soil, so use an acidic compost (ericaceous) for that. If you really don’t get many blooms on your plant, consider using a potassium-rich fertiliser to encourage flowering and make sure they get enough sun.

Generally, lupins are problem free, however, they are often attacked by slugs and snails which eat the young foliage. You can use slug pellets, but I recommend getting some slug traps to combat this as it’s more wildlife friendly.

The other more common issue is powdery mildew forming on the leave and stems as a grey mould. I usually spray my lupins at the first sign of mildew with a fungicide labelled for powdery mildew and remove any affected leaves.

Lupins are best propagated by taking basal cuttings which I did a guide on here. These are best taken in spring between March and April. You can also divide lupins, but it can be unsuccessful, so I like to only divide established plants when they have grown several inches away from the main plant.

Finally, you can propagate lupins from seed in early to mid spring, but it can be difficult as they often rot off and seem to dislike being potted on. Something to keep in mind is that lupins collected from your own plants usually grow true to seed, but it can be a nice surprise when it produces a different colour up.

Overall, you will have the most success propagating lupins by taking cuttings in spring.

Most Lupins are hardy, and they usually just need pruning to ground level for those grown in beds and borders. For Lupins grown in pots, they need a little more care, which you can learn more about in my guide on Lupin winter care.

When you grow lupins, they are susceptible to a few pests and diseases. See my article Lupin pests and diseases to identify what’s wrong with your plant and to learn what to do about it. The most common are probably lupin aphids and powdery mildew.

You can learn what to do with lupins after flowering here, which basically involved pruning them back to get a second flush of flowers and collecting the seeds.