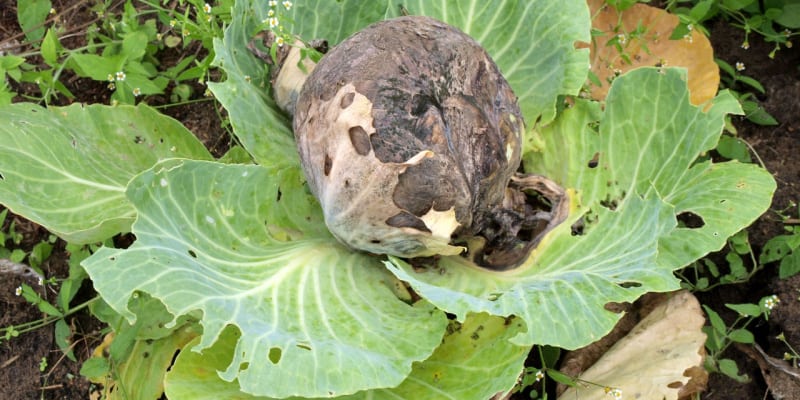 I’ve worked in and around nurseries for over 20 years, and Botrytis Blight, more commonly known as grey mould was a fairly common problem that we dealt with. However, unlike powdery mildew, downy mildew, and even black spot and rust, there is no fungicide to treat the problem. I would say it’s fairly widespread too and will infect most plants. It also seems to be more of a problem in greenhouses because it thrives in high-humidity environments.

I have also experienced it becoming a problem with fruit bushes too, including strawberry plants where the symptoms are more obvious to see because you will notice rotting foliage and fuzzy grey mould covering both foliage and fruit. However, on cane fruits such as raspberries (as well as gooseberries), it’s actually less obvious to spot in the beginning because it mainly causes dying branches, but without the grey mould, you often use to identify it.

The real problem is that there aren’t really any fungicides to treat grey mould, at least none you can buy specifically labelled for Botrytis Blight. I have found that controlling grey mould is more about prevention. In this guide, you can learn more about this disease as well as how to treat and help prevent it.

I have seen Botrytis infect just about any type of plant. This includes ornamentals, bulbs, vegetables and fruit bushes. To name a few that immediately spring to mind, they include snowdrops, onions, broad beans, cucumbers, courgettes, strawberries, tomatoes, blackberries and grapes. Then you have peonies, cyclamen, geraniums and primulas; in fact, just about any plant is at risk.

What is Botrytis Blight?

Botrytis Blight is a common fungal disease (commonly known as grey mould) that’s first seen in the spring on younger shoots. It can appear at any time of year in greenhouses because the conditions are always right, which means it needs humid conditions. Once it infects a plant, usually through a wounded part or even a stressed plant, throughout the growing season, it spreads further and can infect most of the plant as well as quickly spread to other plants, especially if they are overcrowded. It will thrive in a damp, cool, stagnant environment.

How to identify Botrytis Blight

If your plant has this disease, you may notice it on the petals, leaves and buds. A fuzzy greyish powder/mould forms on the plant and the plant tissue turns soft and squishy. The petals turn brown and fall to the ground. Leaf spots form on the leaves closest to where the petals were and the flower buds die before they even open. All in all, the above-ground parts of the plant shrivel up and die. Now, this usually happens with damaged plants or plants with lots of dead leaves. However, I have also seen it on healthy plants where there had been some damage, and this is where the fungal disease has actually infected an otherwise healthy plant.

What to do about this disease?

How to help prevent grey mould

As previously mentioned, there aren’t any fungicides that are labelled to treat grey mould; it may be worth trying a general fungicide. I would perhaps spray plants in spring, however, I find that keeping plants healthy and growing well is the best way to prevent it in the first place. This includes giving them the best growing conditions.

Some ways I have noticed help to prevent botrytis cinerea is to ensure there’s plenty of space between the plants to ensure good air circulation. Do this when planting new plants and pruning out existing plants to create space between them. Remove any dead or diseased leaves and pick up the fallen flowers, buds and leaves.

Don’t let the plants and surrounding soil become over wet and overly humid, especially in a greenhouse. Water early in the day, so the excess water has time to evaporate and water from the base.

I also find that it helps to mulch around the base of plants outdoors because this stops the spores from getting splashed upwards into the leaves as the disease can live on the surface of the soil on fallen dead material.

There is no treatment in terms of fungicides, so it’s more about tidying up and removing dead foliage, buds and flowers from infected plants as soon as you notice it.

If the majority of your plant is infected, you will need to dig up the entire plant. Burn the plant in a garden incinerator or send it to the landfill; don’t throw it on the compost heap because it will live in your compost as it lives in dead organic material.