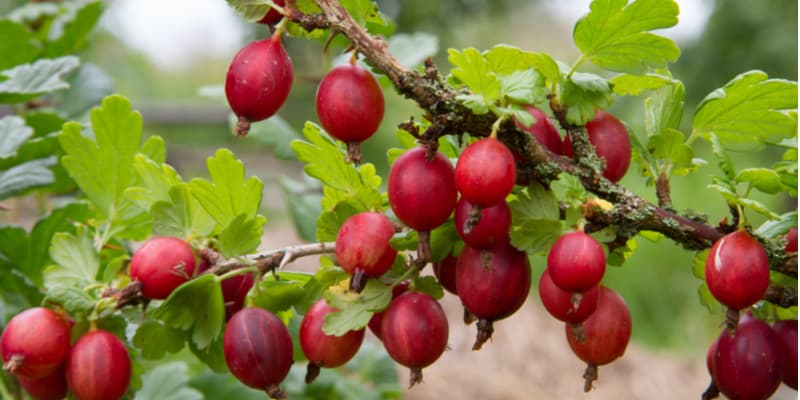 Gooseberries have been a popular British fruit for centuries dating as far back as the Elizabethan era. The fruits are in their season between May and August, with their peak being in July. Early in their season, gooseberries are bright green in colour and usually have veined effects on their skin. They are also somewhat hard and tart. This variety is perfect for making the classic English pudding, jams, tarts, and sauces.

Later on, the fully ripe, sweeter fruits available in July are great for desserts. These need to be picked carefully because they are soft and can burst if squeezed with some force. Ripe gooseberries are red or purplish-red coloured. Now, the short answer regarding when gooseberries are in season is done, but what’s more?

First things first, you need a good pair of gloves and long sleeves. A single plant can give you around 4kg of fruit a year. Harvest time happens in July through September and the fruits don’t ripen all at once, meaning you will go out multiple times to pick the full harvest.

Pick the green, under-ripe berries to make pies, sauces, and jams. In fact, picking around half of the under-ripe berries has the added advantage of allowing the rest of the fruits to grow bigger and sweeter than they may have otherwise been.

One thing with these fruits, however, is that you can’t always judge that they are ripe by just looking at their colour because different varieties have different colours at maturity. They can be red, purple, yellow, or light green when ripe. But one thing is for sure, they will feel plump and juicy when ready. One sure way is to pluck one berry off the gooseberry bush and have a taste.

When it comes to harvesting fully ripe berries, lay a large piece of cloth under the bush and gently shake and knock the berries loose. You can then collect them and put them in small or shallow containers rather than deep bucket because the berries at the bottom can get crushed by the weight of those on top. Given proper care, gooseberry bushes can keep producing for many years.

You can learn more about when and how to pick gooseberries here if you have issues with gooseberries not fruiting, read my guide here

You can put your berries in a container and store them inside your fridge for up to two weeks. Avoid washing them before storage. If you want to store some berries for long, freeze them. Check out our guide on how to freeze gooseberries for months without losing the sweet tart taste and flavour.

Should you want to eat the berries soon after harvest, be sure to pick the tiny dried flower that often sticks around on the blossom end of the fruits. It’s not like they hurt, but they spoil the taste. Also, cut off any stem parts that comes off when you pick the fruit.

In addition to being high in fibre, gooseberries have a flavour that ranges from somewhat sour to fairly sweet, depending on how ripe they are. Ideally, the under-ripe green berries are sour whilst the ripe red/purple berries are sweet.

Gooseberry recipes are common in British cookbooks and you will see them in pies, yoghurt, jam, and desserts. They also make a good addition to savory meals thanks to their tartness. You can combine these berries with a bit of diced cucumber and bourbon on top of grilled seafood. Sometimes you can use gooseberries in meat pies, in fruit salad, as an accompaniment to cheese, chopped and baked on salmon, muddled in cocktails, or even as a sauce for turkey or goose.

Gooseberries are easy to grow fruits and they make some of the most delicious recipes. Their season in late June and July isn’t that long and it’s a time when you have to enjoy them to the fullest.

Find gooseberries for sale is quite tricky so you better plant your own. Moreover, they can be trained against the wall or grown in containers, making them perfect for smaller gardens. Better still, the fruits can be consumed after harvest or stored inside a freezer for several months for later use. Now that’s something!

You can also learn more about growing gooseberries from cuttings here as well as why you need to keep an eye out for gooseberry sawflies which can be a big problem.