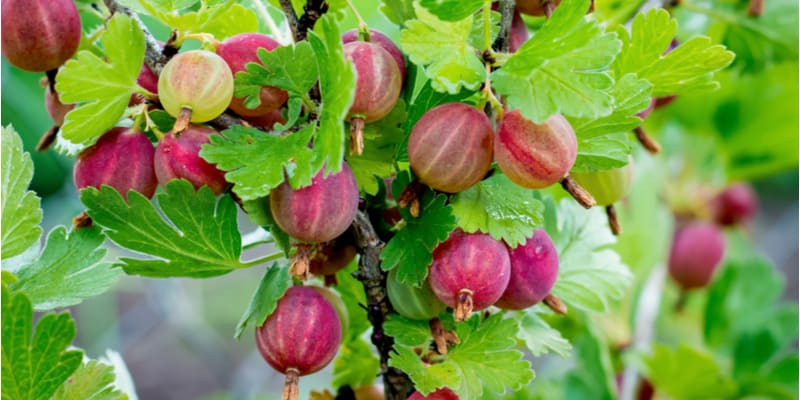 Gooseberries are a doddle to grow and can flourish in nearly any kind of soil provided that they have lots of sunshine. They can be grown in pots or containers, as bushes or even trained against a fence or wall to save space. Today we’ll delve into growing gooseberries in pots and the various aspects surrounding their growth; watering, harvesting, common problems, and more.

Planting the gooseberry in pots

Gooseberries are hardy, deciduous, perennial shrubs that grow up to 5ft tall. They thrive in cool-summer regions, though they do benefit from the cold winter temperatures which freeze the top couple of inches of soil. Some varieties can grow in slightly warmer regions.

Now, gooseberry roots grow wide and not deep, thus you need large pots at least 18 inches wide and fairly deep. Plant them in an organic potting mix for high yields. When it comes to soil conditions, keep it evenly moist and feed the gooseberries with all-purpose fertilizer that’s just high in potassium.

Gooseberries generally do not require a lot of water, but watering every 14 days is recommended in dry seasons. Pot-grown gooseberries often struggle in dry areas, so they need extra care and frequent watering.

In early spring, feed your gooseberry plants with a potassium-rich general fertiliser. Spread 1 ½ handfuls per square yard around the base. Don’t feed them with too much nitrogen as it can easily encourage sappy growth, something that’s prone to gooseberry mildew. Also, mulch the root space with organic matter like bark chips or garden compost so as to conserve soil moisture.

Pruning gooseberries is necessary if you want to harvest big fruits and still keep the plants in top notch shape. You have to prune right from the start. In the first year of planting, cut back five main stems to 15 to 20cm and remove all other stems at the base.

When it comes to the cordon, cut the tip just above the bud back to a quarter. Cut all side-shoots that are about 15cm from the ground and do the same to any suckers. Prune all young side-shoots to at most two buds.

Come the second year in mid-June to July, shorten the gooseberry bushes back to five leaves but don’t touch those branches that are essential in extending the main framework. This cutting back should not remove fruit because fruit typically develops on the older stems and not the current season’s growth. In winter, cut all dead stems plus low-lying shoots, and cut back all side-shoots to at most three buds from the base.

From the second year onwards, you’ll now be dealing with cordons. So during early to mid-summer again, prune all young side-shoots to 5 leaves and guide the growing tip around a support as it extends. After leaf fall, which is later autumn, cut back the same side-shoots to one or two buds. Prune back the tip to a third.

When the cordon is 1.7m in height, prune back the tip to 5 leaves from the previous year’s growth in summer. In winter, cut back to three buds at most from last year’s growth.

Gooseberry plants can also be grown as standard – shaped with a bushy head on a tall stem that resembles a lollipop. Most gooseberry plants are usually bought ready-trained so the only job that remains for the urban farmer is to take care of the plant till harvest season. Gooseberries plants usually fruit very well once they been established, not much work is needed as the trained varieties also make good ornament pieces when they mature and start fruiting.

You can learn more about pruning gooseberries here too

The harvest season comes around June. Harvest all the ripe fruit, and leave the remainder to swell up and ripen for harvesting in July and August. Pick the fully ripened berries carefully because they are so soft and are likely to burst if mishandled. Make sure to protect ripening fruits with fine-gauge netting to keep off birds. Store excess fruits in polythene bags and keep them in a freezer.

Pests, diseases, birds, gooseberry mildew; all these can affect your gooseberries in one way or the other. Pests include capsid bug, aphids, wooly vine, and most commonly, gooseberry sawfly.

Gooseberry mildew causes a powdery grey and white fungus on leaves and stems. It may also spread to the fruit and cause problems with ripening. To deal with this problem, cut and destroy the affected stems and leaves as soon as you see the symptoms. Mildew spreads much faster when the bushes are closely stacked, so always try and space out the plants to allow air circulation.

As of the gooseberry sawfly, check the undersides of leaves regularly from mid-spring onwards and remove any larvae you find by hand. We’ve already mentioned about how to deal with birds.

It’s best to take cuttings that are around 30cm long in Autumn and plant them in well-drained soil or compost. Once rooted 12 months later, they can be planted in thee final positions. Learn more about taking hardwood cuttings from gooseberries here

Gooseberries are great to have in your garden for a number of good reasons; you can eat them, cook them or even have them grow as beautiful ornamental plants. There’s no complaining about space with these ones because they can always be trained against a wall or any support for that matter, and that’s why they are also grown in pots or containers.

If you want to buy them ready, potted gooseberries are available for the most part of the year in local garden centres and online stores. That’s it from us, see you in the next one!