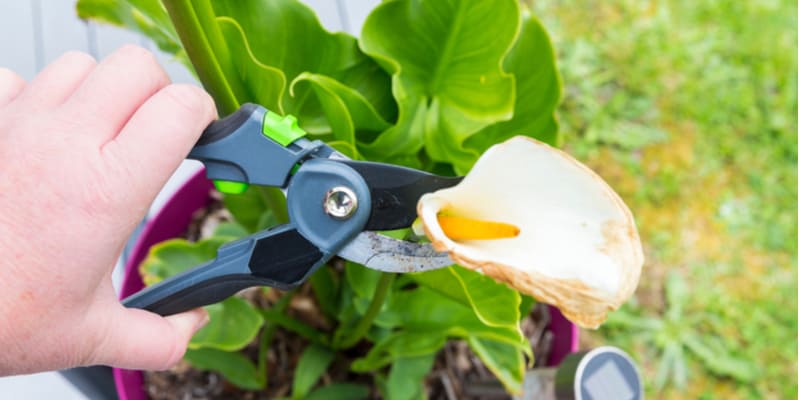 Their long stems and differently coloured blooms fill indoor and outdoor spaces with understated elegance, I am of course talking about one of my favourite plants, Calla lilies. Sometimes, these usually upright plants may become droopy, and this may be caused by several factors that I will talk about below starting with the most common, not enough water, the obvious one but also too much water can also cause wilting:

How much water is in the soil?

Plants usually have different soil requirements, and calla lilies are no exception. Preferring acidic, well-drained and moist soils, lack of moisture or too much will be bad for the plants. If it has been a while since the lilies were watered, they are probably drooping because they are thirsty. This is especially true for calla lilies grown in pots. If you touch the soil and it is bone dry a couple of inches under the soil, give the plants some water and see if they will revive.

Soil deprived of water is bad for calla lilies, and so is too much water which is can sometimes be a surprise to some people. As pointed out above, calla lilies prefer well-drained soils to avoid damaging the bulbs or the roots. Calla lilies experiencing root rot tend to discolour, turning yellow or brown and droop as the disease takes hold of the plant.

To avoid waterlogged soils, make sure the soil if free draining and if in pots, make sure it has holes in the bottom and that you cover them with some broken crockery to stop them from getting blocked up.

The blooms could simply be too heavy to support

In some cases, your calla lilies might be slightly drooping due to the weight of the blooms themselves. If you have potted lilies or lilies in the ground exposed to strong winds, you may find them bent, unable to support the blooms but this can also happen with the wind for very large blooms. Depending on the size of blooms you have, as different cultivars have different flower sizes, place your plants away from strong winds to avoid damaging the stems. I usually just cane my calla lilies if this happens to give them a little support.

Levels of Nitrogen in the fertiliser

Lilies need feeding once in a while, but over-fertilising the plant, especially with nitrogen-rich fertilisers is asking for trouble. Although nitrogen is good for foliage, too much of it in the soil results in scorched, droopy, or discoloured leaves. Instead of focusing on nitrogen-rich fertilisers, try to use potassium-rich fertilisers to avoid such problems and this also encourages better blooms. Remember to follow the instructions given to ensure the plant only gets what it needs instead of overfeeding.

Calla lilies look delicate, but they are fairly hardy plants even in the UK or colder parts of the US. You might want to check if your drooping lilies show any other symptoms to rule out infections. Several diseases that may affect your calla lilies include Phytophthora root rot, crown rot, spotted wilt, powdery mildew, and soft rot.

Telling the difference between some of these infections can be hard, especially if it is root related as the problem is obviously below ground. Fungal infections like powdery mildew that affect the foliage are easily treatable by spraying with a fungicide and removing the worst affected leaves.

However, diseases such as root rot are fatal; therefore, it is good to take preventive measures and avoid waterlogged soils so again this comes back to just providing the right growing conditions in the first place.

Read next: How to keep calla lily bulbs over winter

Watch out for pests

There is no shortage of pests that can take a liking to calla lilies. These include thrips, aphids, spider mites, scales, citrus mealybug, and caterpillars posing danger to your plants.

Like diseases, pest invasions leave a trail behind. Sucking insects such as scale insects, aphids and thrips will attack the foliage, leaving behind discoloured and deformed leaves. Caterpillars will eat the leaves and spider mites will construct small webs on the plant. Most pests can be controlled using a general pesticide and spray at the first signs of them attacking your lilies.

The reasons your calla lilies are drooping can be solved with a bit of tender loving care. For calla lily varieties with large blooms, try using a flower cages such as a peony cage and give the plant structural support which could be as simple as a few canes.

Read next: What to do with lilies after flowering and how to grow calla lilies from seed