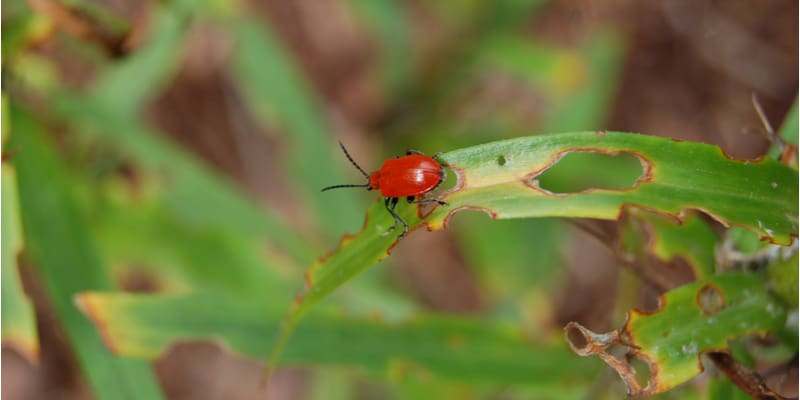 Flourishing lilies are very visually satisfying, especially in full bloom; however, what do you do when you notice something is eating your lilies? Lilies are poisonous to cats and dogs, but other animals like deer, rabbits, and more importantly, the dreaded lily beetles with the bright red shells are fond of lilies.

To avoid further damage to your lilies, it is vital to know the culprits behind the destruction so below I’ve included some of the most common culprits.

Public enemy number one when it comes to lilies has to be the lily beetles. Their capacity for damage is high, and that is why lily growers dislike these pests. Mature lily leaf beetles are identified by their conspicuous red coloured bodies.

These tiny insects adore lily leaves and usually emerge in spring, laying many eggs under the foliage. Within a week or two, the eggs hatch, and the larvae continue feeding on the foliage just like the adult beetles. The larvae, identified by a brown mass under the leaves, are usually covered by their excrement while feeding voraciously and eventually causes defoliation.

They are usually easy to identify if you cannot see them as they leave holes in the leave and edges of the leaves.

Considering the beetle’s reproduction rate, control measures are essential in preventing irreversible damage to the plant. Control measures for these voracious eaters include introducing other parasitic insects to invade the little grubs and destroy them from within.

Alternatively, you can remove the adult beetles manually, but this may be tricky because when in danger, they tend to throw themselves in soil with their black bellies facing up, thus making them inconspicuous. Another effective option is using neem oil applied almost daily to kill the grubs and ward off the adults. You can also use products or pesticides featuring bacterium that dwell in the soil or imidacloprid to reduce the infestation. Personally, I have always taken the removing them by hand route and removing the adults.

Read next: How to Deadhead Oriental Lilies

Where there is good foliage, slugs and snails will appear. Slugs and snails do not do systemic damage to the plant like aphids who suck sap from the foliage. Slugs and snails just eat the leaves and leave slime trails behind, thus affecting the plant’s appearance. Being that they are nocturnal eaters, you would probably notice the damage in the morning.

Control slug and snail populations by introducing natural predators like birds, using beer traps, or placing course material at the base of the plant to hinder their movement.

Another dangerous culprit is the vine weevil, which does irreparable damage to the roots and bulbs, especially at the larvae stage. The adult beetles feed on the leaves too, but the damage is not as extensive as the damage done by the grubs. They are usually more of an issue with lilies grown in pots as they larvae at the roots.

You’ll find various options for controlling these pests such as using natural predators, using neonicotinoid pesticides, pathogenic nematodes for lilies growing in the ground or sticky surfaces around the plant to trap the adult weevils.

Read next: What to do with lilies after flowering

If you live in an environment where deers, rabbits or squirrels are abundant, your lilies may be in trouble. These animals are especially fond of eating the buds and the soft foliage, so they may damage your lilies as they forage for food.

The best way to protect your lilies is to erect physical barriers using things like chicken wire.

For your lilies to thrive, fending off unwanted insects or animals is essential. Keep an eye on your lilies to notice any infestations or niblings to act fast before the problem escalates. The most likely cause if you noticed the leaves been eaten is red lily beetles so keep a watch out for them, early morning is often a good time to spot them.