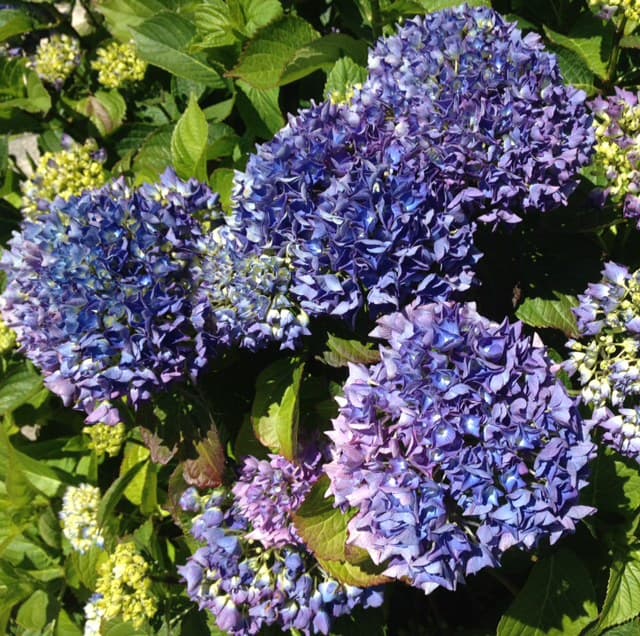 If you’re confused about pruning Hydrangeas then put your mind at rest as we are about to explain in plain English how to prune your Hydrangeas.

The reason it can be confusing to know how and when to prune hydrangeas is that there are two ways in which to prune Hydrangeas depending on what types of Hydrangea YOU have.

Firstly if you have one of the large mop head Hydrangeas like the one pictured to the left which is very popular if not the most popular Hydrangea then you don’t need to prune them, if left to there own devices they will be just fine.  If you want to prune them anyway just to tidy them up then you prune them as described below. Lacecap and oak leaf hydrangeas are also pruned in this way.

How to prune mop heads, Lacecap and oaked leafed Hydrangeas

When to prune Hydrangeas? (mop heads, Lace cap and Oaked Leafed Hydrangeas only)

Prune mop head, Lacecap and oak-leafed hydrangeas after they have finished flower but ensure you do it before August. These Hydrangeas start producing flower buds from around August onwards and retain them until the following summer when they flower. Pruning after August may be cutting off the new flower buds, hence cutting off next years flowers.

Only Prune these hydrangeas after they have finished flowering to remove the dead flowers. Technically this is not pruning you are actually deadheading as you are just removing dead flowers as you would with most plants.

Remember they don’t need pruning but if such time comes when you may decide you need to prune these types of Hydrangeas reasons may include:

You can prune these Hydrangeas by about a third if needed and it should not affect the flowers as the Hydrangeas will not have formed their flower buds yet for the following season. (Ideally, prune in June/July)

How to prune Hydrangea paniculatas and arborescens varieties?

Hydrangea paniculatas include varieties such as Early Sensation (white flowers turning pink) and Limelight (green flowers) and Arborescens include varieties such as Incincabelle and Incredaball (cream white flowers). These hydrangeas are mostly producing white and green shades of flowers and flower on new growth meaning they can be pruned in late summer or early spring before they start to produce flower buds.

These Hydrangeas do not require pruning every year so can be pruned to keep to shape and remove any unwanted branches.

If you have mop head, lacecap or oak leafed hydrangea (if there flowering blue or pink there probably mop head Hydrangea) then you do not need to prune them. If you do need to prune them to revive an old plant or reduce its size, prune straight away after flowering to ensure they will flower the following year.

If you have a paniculata or arborescens Hydrangea (usually white or green green flowers but they do have other colours) they can usually be pruned in late winter or early spring and don’t usually need pruning every year.

Pruning is not necessary and should be avoided if possible but should you choose to prune them then be warned it may affect the flower for a year or two as they do flower on last years growth.

Climbing Hydrangeas need to be pruned straight after they have flowered as they produce new flower buds soon after flowering and hold on to them until the following spring when they flower again which is why if you prune it too late you will be cutting off the new flower buds.

Simply prune just below the spent flowers after they finish flowering, it will then put on new growth that summer which will, in turn, produce the flower buds for the following year.