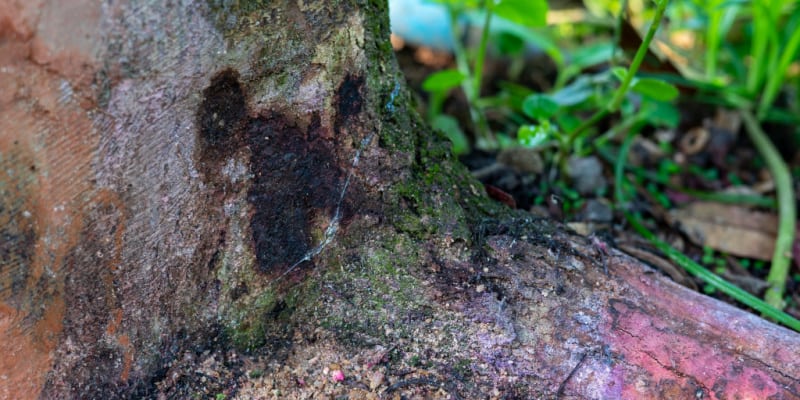 What is Phytophthora Root Rot?

Phytophthora Root Rot is a fungal disease that spreads through the soil and there are several different types too. Unfortunately, it’s actually more common than you might think, however, it is often mistaken for honey fungus because this also causes similar symptoms above the soil such as wilting and yellow/brown foliage. The issue arises as it is commonly associated with wet and water-logged soils. These conditions on their own also cause similar symptoms as it causes the roots and stems to decay.

This fungal disease is commonly associated with trees and shrubs, but it is actually also known to affect perennials, bedding plants, bulbs, and even container grown plants. More commonly I have actually seen it in dogwoods, conifers, aucuba, Buxus, viburnum, rhododendrons, Ribes and Taxus just to name a few.

How to recognise Phytophthora Root Rot

This is the difficult part, the only real way to know for sure is to have it sent to a lab, however, here are some good indicators of what you can look out for. You don’t actually see the symptoms of root rot in the beginning because the problems start in the roots. The roots begin to rot and decay, and this is all hidden under the ground. This rotting then works its way up the plant. Everything becomes soft and squishy, and root rot becomes stem rot. The finer roots are usually affected first.

One of the main above ground indicators is that the leaves become yellow and start wilting, maybe turning brown/red before eventually dropping off the plant. And no matter how much you water the plant, it won’t stop wilting. The problem is, many things can cause plants to wilt, and these said problems have nothing to do with root rot.

You may notice a black discolouration below the bark. However, if you see white fungal growth around the roots, this is most likely to be Honey Fungus and not Phytophthora Root Rot

What can you do about it?

To prevent root rot make sure that the soil for your plants is well-drained, this is something that obviously should be done before planting to help reduce the chances of getting root rot in the first place. I recommend adding plenty of grit or even perlite to make heavy and waterlogged soils lighter and more fine grained for water to pass through easily. Basically, you need free-draining soil. Also, be careful not to overwater your plants and always check that the excess water is passing through the soil and you don’t get standing water. Prevention is essential because there are no real treatments that I have found to work against this disease.

There are no chemical treatments, I would personally just remove and destroy the affected plant and replace the contaminated soil with new topsoil. That being said if you catch it early enough, or you aren’t sure if it’s Phytophthora root rot, you can try the following:

First of all, you need to see just how bad the root rot is underground. Expose some of the roots and check how many are black, rotted and decayed. Separate the roots to dry them out. If you think you can save some of the roots (very unlikely and probably not worth doing if I’m being honest), dig up the plant and then wash the roots. Cut off the diseased roots with a sterilised knife to prevent the spread of the fungal spores. Personally, I would always just remove and burn the plant to avoid spreading the disease further. However, if you want to risk it, this is what else you need to do.

Remove the water-logged soil from around the plant, removing a good amount, and replace it with new topsoil with a mixture of organic compost and horticultural grit. This is only worth trying if the soil is not free-draining. Replant the healthy part of the plant.

If most of the roots of your plant are rotten, you just have to destroy the complete plant (recommended). Don’t put the plant in your compost bin as the disease spreads easily through the soil. Always remove a good amount of soil and replace it with new soil to try and remove the contaminated soil which probably has spores in it. Believe it or not, these spores can stay dormant for years.