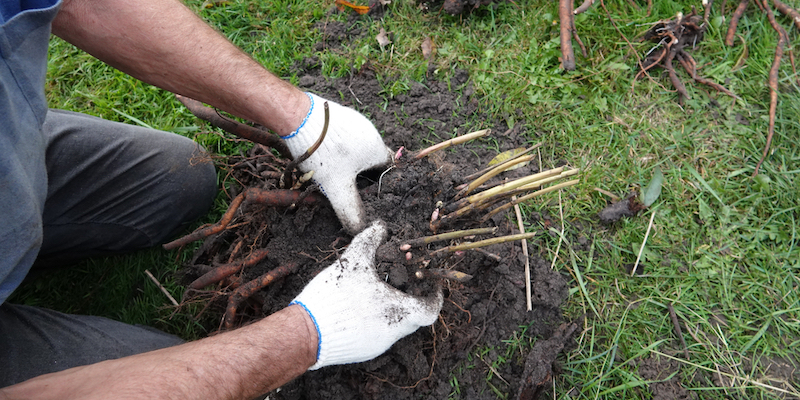 It’s not necessary to divide peonies and they can do just fine if lift to do their own thing. However, I like to divide mine every 3-4 years as I find they make much better plants and don’t become too overcrowded which can also increase the chances of diseases. Ideally, I like to divide them into smaller sections in late summer/autumn/Fall, usually around September. I find this is probably the best time to divide them but you can also do it in spring when the new shoots appear but I’m always afraid of damaging the new shoots.

What I will say is that peony roots can be quite deep and thick so be prepared to dig right around them a quite deep, probably around a 1ft deep and you will probably need a saw or knife to divide the section of very established plants. I personally use a Wilkinson sword pruning knife to cut mine into sections.

When to divide peonies

Transplanting and dividing peonies is best done in late autumn, in or around September as already mentioned but you can do it as late as October. By this time, the peony has stored plenty of food in its roots for the next growing year. However, I like to lift and divide them so they have a good 4-6 weeks before the first frost comes. This is when I also like to cut back peonies even if I’m not dividing them.

How to divide peonies

Cut the peony stems down to just above ground level leaving a couple of inches above soil level.

Dig around the plant, probably a foot (12 inches) down and try and get your spade right under the roots. Be careful to keep as much of the root system as possible. What I will say is, this is not always possible as the roots can easily go 2ft into the ground but as long as you have a good clump of roots you should be fine.

One you lifted the large clump out of the ground, shake off the soil so you can see what you’re doing. Some people like to wash them down but I don’t personally do this.

Use a sharp knife or pruning saw to divide the clump into sections. Ideally, I like my sections to have at least three to five growth buds (they’ll be dormant but there usually white) on it and a good root system. If you have very large clumps to divide them try and get 7-10 eyes on each section as this is give a really good display the following year.

Where to peony sections

Peonies like full sun and soil that’s well-drained but moist. They need at least six hours of direct sun each day, so keep them out of the shade of walls, fences, trees and other tall plants. If your soil tends to hold water, add some compost, peat moss or leaf mould to do it make it lighter and drier. If it’s sometimes very wet, add plenty of horticulture grit to the soil to improve drainage.

How to plant divided peonies

Dig a hole that’s large enough to hold the root system of the peony section/clump.

Add some good quality compost to the hole.

Plant the peony clump with teh eyes pointing upwards. Make sure that you don’t put it in the hole too deeply, this is the sure way to have issues with flowering. They don’t like to be planted too deep, the crown of the root (top of the root) shouldn’t be more than 2.5 to 5cm under the soil, this is super important as it causes them not to flower.

Fill in the hole around the peony division with soil, patting it down and firm it into the hole, remember not too deep though, it’s better to be shallower than deeper.

Water the new plant thoroughly and don’t allow it to dry out.

Divided peonies should bloom within two years after being moved to their new location although decent-sized blooms with plenty o eyes should flower the following year.