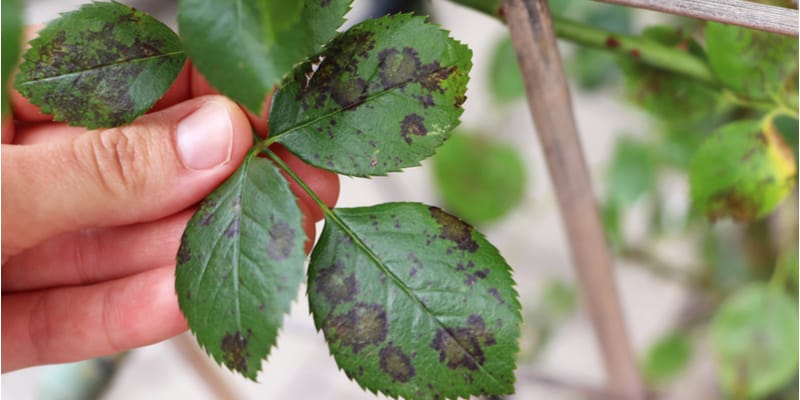 Roses are considered the queen of flowers due to their popularity worldwide, and as beautiful as they are, they have their own share of problems with diseases such as blackspot, rust and mildew being some of the most common but more on these below. There are some rose cultivars designed to be more pest and disease resistant, but I have never found a specific rose that doesn’t suffer from one issue or another.

In this article, I cover some of the common problems that roses face and some tips to help combat these issues and even better prevent them from happening in the first place.

Able to create spores in a matter of hours, Diplocarpon rosae, otherwise known as blackspot is a common fungal disease in roses. This disease not only affects the plant’s appearance but over time, it may cause defoliation and eventually stem dieback.

Black spots on the foliage that develop into discoloured patches signify the infection.  The yellow leaves eventually fall off leaving the plant with limited foliage to make food. To help the plant recover, one needs to remove the diseased sections and apply a fungicide pest. Products such as Bordeaux Mix, neem, or those that contain myclobutanil or mancozeb such as RoseClear will be of great help.

Because fungi thrive in wet and warm environments, always make sure that your plants are well ventilated. It may also be good to avoid spraying water directly to the leaves.

I like to spray my roses with a fungicide for roses such as Rose Clear as soon as they come into leaf in spring as this is teh best way to help prevent it in the first place. This also helps prevent powdery and downy mildew as well as rust which I talk about next.

Powdery mildew caurses white coating on all parts of roses

Brought about by Sphaerotheca pannosa, this fungal infection is characterized by powdery mildew in roses. The disease attacks the young foliage first causing crinkling foliage with a white coating that continues to spread. The fungi not only affects the foliage but will also spread to the stems and flowers if left unchecked.

Chemical intervention includes using products that have propiconazole, myclobutanil, propiconazole, and hexaconazole. Organic methods include the use of sulphur, milk, metal salts, neem oil, or potassium bicarbonate. Utilising Pm3 allele in breeding is the best genetic method to deal with powdery mildew as it boosts the plant’s immune system. I personally now just treat mine with a general fungicide.

Phragmidium mucronatum commonly known as rust disease is specific to roses and typically appears in summer or spring. The fungus manifests on the underside of leaves forming powdery orange pustules that distort stems. The infection on the underside of the leaves causes premature leaf fall, which affects the strength of the plant.

The airborne fungus can be controlled by removing the infected areas and applying fungicides with tebuconazole or triticonazole. You can also use products that combine both insecticide and pesticides such as myclobutanil and cypermethrin or triticonazole and acetamiprid to ward off both pests and diseases.

Using bicarbonate of soda or lime sulphur is also a good method to deal with the fungus. Again a just use a general rose treatment like RoseClear as this also kills aphids too.

Dealing with downy mildew on roses

Peronospora sparsa is from the fungi family and it is behind the creation of downy mildew. You will notice dark brown or purplish-red angular blotches on the leaves. The infection affects young leaves, buds, blooms, and stems causing purple lesions that are hard to miss. The fungi will continue damaging the plant until defoliation occurs, which will weaken the plant eventually.

To manage the infection, the first thing is to remove the diseased stems, buds and leaves followed by regular use of a fungicide until the infection dies down. The ideal fungicides to use when dealing with downy mildew are ones that contain copper. Always follow the set instructions to prevent further harm to the plant.

Another fungal infection that attacks roses among other plants is Botrytis cinerea. This disease affects the hips or blooms of a plant presenting grey or brown mould that causes rot. The airborne pathogen enjoys cool humid weather and in roses, it manifests damage on the buds, petals, stems, and leaves leaving behind wilted disfigured plants.

This infection tends to spread fast especially when the environmental conditions are perfect; therefore, fast action is needed. As always, remove all the infected areas first and then apply fungicides whether organic or chemical. There are specialised fungicides to deal with Botrytis cinerea easily accessible online but you have to take note that these fungicides will not be fully effective due to the pathogen’s genetic plasticity.

Organic preventative options include the use of Trichoderma harzianum and Streptomyces lydicus, which parasitize or depriving the fungi of much-needed nutrients.

While roses can grow without too much handling, things can go wrong if they are completely left unattended. If you do not care for your roses and leave them dehydrated without enough nutrients, it is easy for cane canker to set in.  Cane canker is a fungal infection that seeps into the plant’s system through open wounds and affects the stem, killing the plant slowly.

The disease initially manifests small red or yellow spots on the plant’s bark and then it develops into noticeable brown cankers with dark margins. You will also notice that the infected stem becomes sunken and if left to spread, the fungus will cause the demise of the plant.

Remove the diseased sections using sterilised secateurs and give the plant time to heal. The use of fungicides will assist the plant get rid of any traces of the fungi in the plant’s system.

Crown gall does not only affect roses but a wide variety of other plants. Just like cane canker, this infection seeps into the system through open wounds that didn’t heal properly. The bacterium Agrobacterium tumefaciens affects the plant’s intake of water and nutrients. This soil borne pathogen begins as light-coloured tumours at the crown that continue growing.

Eventually, these tumours turn black or dark brown and can take hold of the primary and secondary roots. Once the vascular systems are affected, the plant will begin to wilt and eventually die.

The disease is hard to manage; therefore, preventative measures are best. Avoid inflicting wounds to your bushes and while pruning and disinfecting the secateurs before moving to the next section to avoid spreading the disease. Plant disease-free roses in clean, well ventilated, and well-drained soils to avoid future problems. I recommend removing roses affected by crown gal as it’s often better than trying to treat it.

Aphids are common on rose plants

Aphids have a bad reputation in the plant world; they suck the sap out of the plants and leave them disfigured. They also secrete honeydew, a sticky substance that other small insects like ants enjoy consuming. The sticky substance also promotes the growth of sooty mould that slowly infects the plant.

Aphid populations can increase quickly; therefore, management is key to saving the plant. An affordable method for dealing with these insects is using insecticidal soap or fatty acid salt. You can also utilise specialised chemical insecticides but ensure to follow the instructions provided to avoid hurting the roses further. I recommend treating roses with a pesticide at the first signs of aphids.

Just like aphids, thrips also suck the roses sap to attain nutrients causing deformities. These winged insects do not cause much damage in small populations but large populations will affect the roses vigour. Their small size allows them to hide in the flowers and the underside of leaves undetected until the areas start possessing a noticeable silvery appearance.

You may need a magnifying glass to see these small insects, but once you have confirmed their existence, take action. You can employ their natural predators which include ladybirds, use horticultural soap, or pesticides that contain pyrethrins or acetamiprid. There are many methods available to handle thrips so there fairly easy to control.

Rose Slugs the larva of sawflies feed on roses

While the name suggests that they may be real slugs, they are not. Rose slugs are sawflies in the larva stage that produce slime-like real slugs do and curl into balls when they are not feeding. They consume the leaves leaving them looking translucent, which affect the plant’s appearance. In small numbers, the damage will not affect the plant’s health. In large numbers, the plant will weaken but it will not die.

Encourage birds into the garden that prey on rose slugs as a method of control. You can also use insecticidal soap or neem oil as an organic option to control them. Specialised insecticides are also available and the same pesticides that treat aphids usually treat most other pests too.

Japanese beetles will eat all parts of roses

Japanese beetles attack plants in large numbers giving the plant little resistance to irreparable damage. They not only consume the leaves but also the flowers leaving behind a disfigured plant. It is easy to spot these insects because they don’t try to hide; they just eat the plant outrightly.

Managing Japanese beetles requires the use of pesticides that include pyrethrins. Alternatively, the use of neem oil has proven effective because it stops the insects from feeding on the plant further. Use nematodes to kill off Japanese beetle grubs before they mature because adult beetles are significantly harder to get rid of.

Identified by their spotted reddish-brown bodies, Rose curculios are small weevils that invade plants. Both the larvae and adult weevils can cause serious damage, especially in large numbers. The adults prefer white or yellow roses and they lay their eggs inside the buds. Once the buds bloom, you find that the grubs have already damaged them.

You can try to remove them by hand but if the infestation is intense, this will take a long time. Use insecticides to rid of the weevils or find natural predators such as wrens and bluebirds.

Read next: Learn more about the pests and diseases that attack hydrangeas and treating sawfly larvae on roses here

The issue with roses is they are more suspectable to diseases and even aphids than many other plants, especially blackspot, rust and mildew. The minute you notice that something is attacking your roses, look at the symptoms, find a probable cause and deal with it before all your beautiful blooms are disfigured or the plant dies.

Taking care of roses needs patience, but the blooms make it worthwhile. Personally, I recommend treating roses with a fungicide as soon as they come into the leaf in the spring as preventing them is easier than trying to treat them.